New York, USA / November 12, 2021 / SEAPRWire / The Party Grandpa Retirement Club is launching its NFTs soon. Its minting will go live on November 17 as from 9 pm eastern time. Finally, NFT fans can join the retirement club with an NFT for good rewards. By joining the launch, there is a chance to win 5NFT, 100 presales, and $5000. 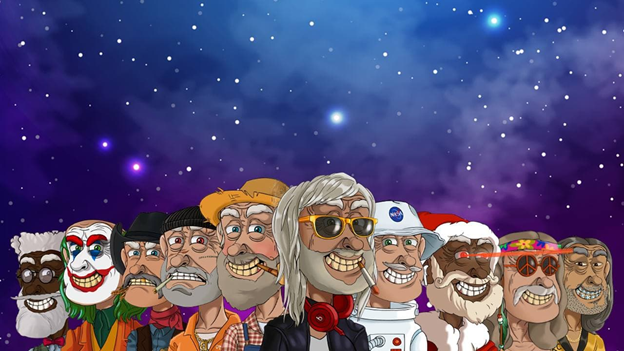 The party grandpa has an exclusive collection of 10,000 creatively made grandpas. They are all different and uniquely made and stored in ERC-721 tokens on the Ethereum blockchain while being hosted on IFPS.

The NFTs are not your ordinary grandpas as they are uniquely made with more than 180 hand traits. When a fan buys a grandpa, they automatically gain membership to the retirement club. There is never a dull moment with the grandpas as they want fans to enjoy life with them. The interesting part is that $200,000 is to be won when one buys a grandpa.

There is no doubt that the future is NFT. Who would have thought that an NFT could get you an entryway into retirement? Everyone is used to the idea of buying a retirement scheme and or getting into all these kinds of schemes to secure the future. Thanks to tech and blockchain, you can buy into a retirement scheme in a fun way. The party grandpa retirement club gives its members a chance to own their favorite grandpa and use it as a gateway to many benefits such as a monthly interest and access to exclusive events.

There are ten rare and ten honorary grandpas that have been drawn creatively to portray different characters and personalities. Examples include the prisoner, Santa, farmer, astronaut, the party guy, the hippie, the french Dj, the sheriff, the hipster, the joker, etc.

There is already a $100K fund set aside for financing community creations, designs, and marketing development in addition to a community wallet.

As mentioned earlier, a grandpa NFT owner will get the chance to join the retirement party. That means they will access a retirement club program that comes with many benefits.  It will unlock access to various monthly meetups all over the world. The meetings may include business conferences, training, conventions, cryptocurrencies, and investments. The meetups include exclusive monthly social events worldwide, including special events such as Coachella, Burning Man, Tomorrowland, and Ultra Music Festival. In addition to that, one lucky grandpa holder stands a chance to win $1000 in ETH every month. All the lucky winners of the 20 special editions will get a $1000 monthly reward.

As for the mint event, when you mint your grandpa and hold on to him, you stand a chance to get a second NFT mint for free.

Currently, all the grandpas are sold out. All the lucky grandpa holders will be invited to the first Grandpa’s Party that has been set to happen in NYC. Twenty lucky winners will be randomly chosen for a fully paid trip, including flights and a five-star hotel. As of January 2022, there will be monthly parties where the members get to choose the location.

As much as the retirement club is fun for members, the less privileged will not be locked out. The platform plans to give $50k to charity to help the elderly in need. The members are the ones who will vote for their charity of choice.

There are many other advantages of participating in the mint from the word go. All early token holders are automatically added to the reward program. After the announcement, there will be daily raffles every day for a chance to win 1 NFT from the collection at the floor price in one month. In three months, a member will get their NFT delivered at their home, where they will receive a 39” printed edition of their NFT. The company will release a community wallet in six months, where members will get a 60% royalty redistribution.

After spending $100k in marketing campaigns of the sale launch, the company plans to use the remaining 40% from secondary market royalties for marketing to increase the value of the NFTs.

All grandpa owners can earn a retirement income from staking their NFT for monthly rewards. Every second-market transaction attracts a 10% royalty. 60% of the second market royalties are distributed to all party grandpas every month.

The Party Grandpa Retirement Club is an exclusive NFT platform with 10,000 uniquely made grandpas that give you a membership into the retirement scheme. The grandpas are made and stored in the form of ERC-721 tokens on the Ethereum blockchain while being hosted on IFPS. Owning a grandpa unlocks many rewards, which include access to exclusive events.

The article is provided by a third-party content provider. SEAPRWire ( www.seaprwire.com ) makes no warranties or representations in connection therewith. Any questions, please contact cs/at/SEAPRWire.com